Many modern uninterruptible power supply (UPS) systems have an energy-saving operating mode. Data show that very few data centers put it to use because of the potential risks.

“Eco mode” is a term used with many different pieces of equipment to define a state of operation in which less energy is consumed, which is a more economical operation. When the term is used in reference to a smartphone or car, it generally means some sort of toned-down operation where not all the functions are available and the system runs certain functions at slower speeds to consume less energy. Whether this affects the overall operation of the equipment depends on what task the equipment is performing.

The main function of an uninterruptible power supply (UPS) is to protect the critical load during an outage by supplying backup power from a stored-energy device, and by providing stable voltage and frequency. Similar to other equipment, the intent of running the UPS system in eco mode is to increase efficiency by reducing the amount of energy consumed by the UPS. The Green Grid defines eco mode as “one of several UPS modes of operation that can improve efficiency (conserve energy) but, depending on the UPS technology, can come with possible tradeoffs in performance.”

Does running the UPS in eco mode affect the operation of the UPS, making the overall system less reliable and potentially putting the critical load at greater risk? Is there a way to use eco mode to improve efficiency without compromising performance or reliability? These are questions that must be reviewed when considering designing and operating a critical facility with eco mode. The goal of this article is to take a closer look at the different UPS operating modes and how they impact data centers and other mission critical facilities.

Although there are different metrics used to measure efficiency in data centers, the one most commonly used is power usage effectiveness (PUE), created by the Green Grid. It compares the total data center facility’s power to the power used to operate the IT equipment. The optimum data center would have a PUE value of 1.0, where all the power going into the data center is being directly used to power the IT equipment. Any value above 1.0 means that a portion of the total facility power is being diverted to support systems, such as cooling, lighting, and the power system. The higher the PUE number, the larger portion of the power is consumed by the support systems relative to the IT equipment itself, resulting in a less efficient data center.

When designing a data center, most engineers, owners, and operators focus on the mechanical system and the ability to use free cooling to lower the PUE and increase efficiency. The electrical system, however, also wastes energy in the form of losses due to inefficiencies in the electrical equipment and distribution system. On average, electrical distribution system losses can account for 10% to 12% of the total energy consumed by the data center. That means a data center with 2 MW of IT load and a yearly average PUE of 1.45 (2.9 MW of total load) has 348 kW in electrical losses and will spend approximately $300,000 a year on wasted electrical energy. That wasted electrical energy cost in conjunction with tighter operational budgets and commitment to sustainability have forced engineers and owners to take a stronger look at electrical systems to find ways to eliminate electrical losses.

In a typical legacy data center electrical distribution system, there are four components that contribute to the majority of the losses:

Another method of increasing efficiency is to eliminate the equipment with the most losses. This method requires different power strategies, such as implementing higher-voltage ac and dc distribution to eliminate equipment like PDU transformers, UPS invertors, and IT power supply rectifiers. Each of these power strategies has advantages and challenges that impact the operation of the data center, so they must be evaluated when planning a data center.

A third method that manufacturers are recently promoting, and some facilities are starting to implement, involves the operation of the UPS system in some type of economical or eco mode. This mode of operation increases efficiency by eliminating the rectifier and inverter losses in the UPS.

VFD topology is commonly referred to as “offline” UPS, where the rectifier/inverter circuits are offline and not part of the normal power path. Because the losses associated with the rectifier/inverter are removed during normal operation, this mode is similar to the effect of operating a double-conversion in eco mode. In normal mode, the load on a VFD-type system is exposed to the raw utility power. These are traditionally smaller, single-phase-type UPS systems. 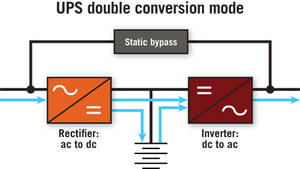 In the traditional or classic eco mode, the load is normally powered through the bypass path, exposing the critical load to the raw utility power without conditioning, similar to the VFD topology (see Figure 2). The inverter is in standby and only engaged when the utility fails. Because of this, the losses in the rectifier and inverter are eliminated, making the UPS system more efficient. 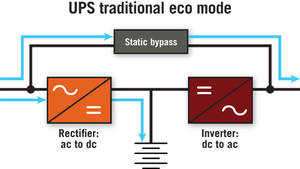 The average static double-conversion UPS system operates between 90% efficient at 30% load to about 94% efficient at 100% load. The efficiency percentage can go up or down a little depending on the technology used, and whether the UPS contains an input isolation transformer. With the elimination of the rectifier and inverter losses, the efficiency of the UPS system in eco mode can increase to 98% or 99%. In a 2N redundant-type (system + system) configuration, where the system is typically operating each UPS below 40%, that equates to about a 4% to 8% increase in efficiency. The increase in efficiency also means less heat, which reduces cooling requirements. The Green Grid estimates an average improvement of approximately 0.06 in PUE when going from double-conversion to eco mode.