There is quite a bit of flux in the wireless building instrumentation and controls protocol market with numerous players jockeying for dominance. Though wireless systems are becoming the norm for product manufacturers in many cases, not all engineers fully understand the best way to specify these systems.

Wired building automation systems (BAS) have been successfully installed in both new construction and renovation projects for many years, and are the standard way a BAS is installed. Recently, wireless technology has become more prominent in the marketplace. This trend will continue, as a significant portion of the construction market consists of renovation work, and these projects pose difficulties for wired networks. As more flexibility is required in the built environment, wireless technologies can be easily reconfigured to support new building layouts.

Most wireless installations today are classified as hybrid systems because they are a combination of wired and wireless systems.

Tier 1 is the primary bus, sometimes referred to as the management level, that is typically a wired solution and generally uses BACnet/IP protocol. This level is where operator interface with the system typically occurs, and devices such as operator workstations, Web servers, and other supervisory devices are networked together.

Tier 2 is the secondary bus and is commonly referred to as the automation level. It is also typically a wired solution and generally uses BACnet/IP, BACnet/MSTP, or LonTalk protocols. This level generally connects field controllers, programmable logic controllers, application-specific controllers, and major mechanical, electrical, plumbing, and lighting equipment.

Tier 3, or field level, is where end-user devices like thermostats and other sensors reside. While wireless networks can be used at all levels, this level is the most common implementation for wireless technologies due to their ease of installation, flexibility, and ease of relocation.

The wireless technology that is most widely used is WiFi (IEEE 802.11 a/b/g/n). This technology is extensively used in information technology (IT) systems. WiFi operates in the industrial, scientific, and medical (ISM) frequency bands and is capable of data rates up to 300 MB/sec (revision n). The data rates of a WiFi network are easy enough to support a very large BAS. Because this technology is so widely used, it is easily managed and maintained by most IT personnel. The disadvantage of WiFi is that it is a more expensive technology to deploy and it consumes considerably more power than other systems.

ZigBee is a widely accepted wireless protocol used in the building automation industry. This level of acceptance typically keeps development and deployment costs lower than other protocols. Zigbee is based on the IEEE 802.15.4  standard. The standard specifies a maximum data rate of 250 kB/sec across a self-forming meshed network. Since Zigbee uses low data rates, the corresponding power consumption is also low and results in a long battery life. ZigBee operates in the same frequency bands as WiFi but can co-exist with WiFi networks when properly configured.

Most wireless-enabled controllers, repeaters, and sensors require some sort of power. The power typically is wired for WiFi  with the use of batteries for  Zigbee. Most battery-operated wireless sensor devices have a battery life of up to 5 yr, though this might vary widely depending on use in the building. 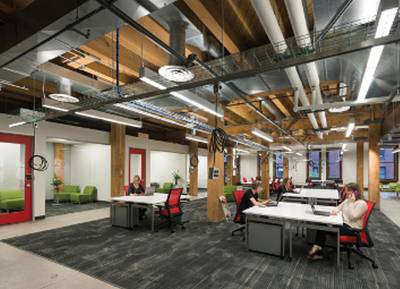 Battery life is primarily affected by how far the information needs to be communicated, how much information is being transmitted or received, and how often the communication can be performed or cycled. Battery replacement and labor cost need to be considered in the lifecycle cost of the wireless system.

As another example, EnOcean devices use self-powered sensors that transmit data at a rate of 120 kB/sec in a mesh network at a low-frequency range. EnOcean devices utilize very low data and frequency rates. This allows EnOcean devices to have extremely low power consumption.  This allows the sensors to harvest energy from the environment to power them;  where sensors capture measured values, the energy state constantly changes. When a switch is pressed, the temperature alters or the luminance level varies. All these operations generate enough energy to transmit wireless signals. Because no batteries are required, the lifecycle cost of these devices can potentially cost less than battery-operated systems due to the elimination of the battery cost and battery-deployment labor cost.

Wireless systems are required to have the same level of reliability as wired systems. These networks need to send and receive data continuously with minimal communication error. Designing, specifying, and implementing a reliable wireless network requires an understanding of mesh networks and intelligent routing options to ensure system data packets are successfully transmitted.

With proper planning and implementation wireless networks can be as reliable and secure as a wired network. Using wireless mesh networks with “smart” routing techniques, challenges like ensuring data packets successfully reach their destination can be mitigated.

A mesh network is a scalable network architecture where any device in the network can communicate to other devices by “hopping” over multiple access points. This allows the system to provide coverage over a much larger area, avoid single points of failure, and deliver high capacity. The network can be considerably less susceptible to interference and environmental conditions than a single access point can provide.

The building’s construction characteristics must be considered during the design and layout of a wireless network. Construction materials and obstructions have a significant impact on wireless performance. These factors determine the allowable distances between transmitters, receivers, and the number of repeaters that will be required throughout the building. Depending on the building type and owners’ tolerance for downtime, these devices can be connected to an emergency power source as well. 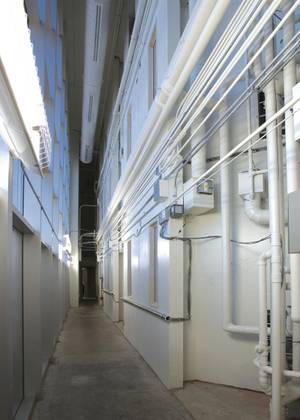 Drywall and wood are excellent media for wireless signal propagation. Signal loss through concrete is dependent on its thickness and rebar spacing. Signal loss also can be significantly impacted by the quantity and type of steel superstructure, elevator shafts, and other metals used in construction and building geometry. All of these factors need to be understood and accounted for in project design specifications and construction drawings. The drawings and specifications should outline coverage, bandwidth performance, device options and quantities, and antenna locations to ensure proper wireless system performance and reliability. However, because existing buildings and renovations are a prime application of wireless technologies, reduced battery life is of significant concern due to the inability to change existing construction materials.